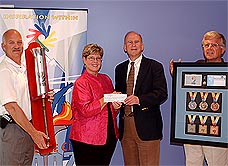 On 13 May 2008, the 2007 Salt Lake City Winter Deaflympics Organizing Committee CEO and Secretary General, Dwight Benedict and Ed Ingham respectively and Dr. Larry Fleischer, President of USA Deaf Sports Federation invited Dr. Donalda Ammons, President of ICSD to come for the final wrap-up meeting. It was when ICSD was presented with a check of USD $42,000.  That was part of the Memorandum of Understanding between ICSD and the organizing committee to split 50-50% for any surplus money.

In addition, the 2007 SLC Organizing Committee donated the original torch and a shadow box frame of pins, a set of medals, mini-flags, and philatelic stamps.  ICSD is deeply appreciative of the 2007 Winter Deaflympics Organizing Committee's hard work and dedication to the success of the Winter Games.

It is the second time ICSD has received the surplus from an organizing committee- both times were from the United States- 1985 and 2007.  Hand waves to USA!