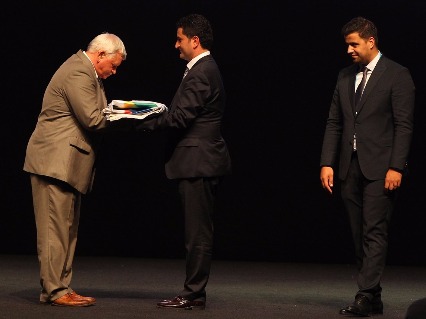 23rd Summer Deaflympic Games, which had started on July 18 and brought together more than 3 thousand athletes from 97 countries, has ended with an closing ceremony in Yaşar Doğu Sports Hall on the 30th of July.

Having brought together more than 5 thousand participants and 3 thousand athletes from 6 continents and 97 countries, the most inclusive sports organization in Deaflympics and Turkish sports history has ended with a grand closing ceremony in Yaşar Doğu Sports Hall. Athletes, coaches, technical delegates and volunteers attended the ceremony.

Samsun Metropolitan Municipality Mayor Mr. Yusuf Ziya Yılmaz stated they experienced the joy of hosting their guests in Samsun and continued: "Our guests made our city colorful. They increased our joy of living. They made us happy. I sincerely thank them. Please don't forget our Samsun".

Samsun Governor Mr. Osman Kaymak said they are in a peace of mind with the knowledge that they perfectly hosted the organization. He said: "More than 3 thousand athletes from 97 countries competed for success. They got to know Samsun. I hope you got to see Turkey and Turkish people with all their grace".

Health Minister Mr. Ahmet Demircan remarked that the organization was very successful, continuing: "I thank my athlete brothers and sisters for demonstrating this sporting beauty. As it can be seen, we had an organization worthy of Samsun's fame. Of course, the people of Samsun deserve the greatest thanks".

ICSD President Dr. Valery Rukhledev started his speech by thanking the Turkish government for hosting Deaflympics. ICSD President said: "We had a great time. It was a very successful Deaflympics. I would like to thank you all for your efforts. The smiles on your faces won our hearts."

Youth and Sports Minister Mr. Osman Aşkın Bak started his speech by thanking the previous minister Mr. Akif Çağatay Kılıç and asked the people of Samsun to applaud him. "The slogan of this Games was 'Our voice is sport'. Sport is peace, brotherhood. It's the common language of the masses. It brings people together. I would like to present my gratitudes to everyone who played a role in organizing this event successfully". He also said: "Turkey is always ready to host international organizations with its new sports facilities and investments into sport. We provided an example of this today".

The closing ceremony concluded with folk dances and a concert from Turkish singer Murat Dalkılıç, simultaneously translated into sign language.