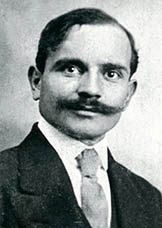 The early pioneers of the international deaf sports movement were Eugène Rubens-Alcais of France and Antoine Dresse of Belgium.

Eugène Rubens-Alcais (1884-1963) was an auto mechanic by profession and a competitive cyclist who came to be known as the deaf version of Baron de Coubertin, the father of the modern Olympics. Rubens-Alcais developed his vision of international games for the deaf, patterned after the modern Olympics, as he led the Paris Sports Club for Deaf Mutes and founded the French Deaf Mute Sports Federation (now the French Deaf Sports Federation, FSSF). He promoted the idea in his deaf sports magazine, The Silent Sportsman.

A brilliant man of modest habits who lived in a sparsely furnished and simple attic apartment under a mansard roof, Mr. Rubens-Alcais passionately pursued and gave all his time to his vision by working for deaf people and deaf sports. He led his growing deaf sports movement as the President of CISS from its founding in 1924 until 1953. He died 10 years later.

Antoine Dresse (1902-1998) came from a family of bankers and industrialists in Liege, Belgium. He followed his family tradition and rose to the top of a brokerage firm. He was also a runner and a tennis player and shared the vision Rubens-Alcais had about deaf sports. Together, the two men worked tirelessly to reach their dream.  When the dream was finally realized,  Dresse became the founding Secretary-General of the CISS.  He was also involved in the Games as an athlete, winning two bronze medals bronze medal in tennis in 1924.  He also participated in the next few games and added five more medals including a gold.  Earning a total of seven medals in the 1924, 1928, 1931, 1935, and 1939 games was quite impressive for a deaf athlete, a co-founder and the CISS Secretary-General of the deaf international games!  He held the CISS position for 43 years until he retired in 1967.   In addition to his leadership with the CISS,  he was also a driving force behind deaf sports for his native country for more than half a century.

The traditions created by the founders were carried out and strengthened over the years by men and women who shared the passion for sports competition and for the establishment of a sense of identity within the world-wide deaf community. The members of this exclusive group of outstanding leaders share a background of lifelong commitment and leadership in their national as well as international deaf sports organizations.